Orbi Home WiFi System is the easiest and most amazing way to enjoy high speed WiFi in every corner of your house, with its Tri-Band WiFi your internets runs at a very high speed irrespective of how many devices are connected .The home WiFi system has an easy setup that works with you internet service provider right out of the box. Orbi Home WiFi system also prides its Multi-User Multiple Input Multiple Output (MU-MIMO) simultaneous data streaming and other management options. This is the best pick for your home WiFi system anytime, any day..

To whom, and where it is used for:

1).A fast simple set up to connect devices including webcams. This Orbi home WiFi system is a game changer. Generally good for households with lots of devices

2) The WiFi dead spot solution for large homes. The performance is outstanding covering far ends of the house and back patio.

3) The Orbi home WiFi system is reliable since it has a USB which is mandatory for some smarthome hub making it the ideal one.

4) Good for concrete apartments where normally have major issues with WiFi and speed.

6) Good setup for those who need a private network with no guest access unless via the guest option.

Why it is worth to buy:

Orbi’s Tri-Band WiFi creates a dedicated wireless connection between the Orbi router and satellite. The download speeds throughout the house will be consistent in the 10-150 Mbps range with some fluctuation that occasionally yield more than the 150 Mbps you are supposed to get.

There will be no more WiFi dead spots anywhere in your house. You will also have around 170Mbs-180Mbs coming out of your cable modem via Ethernet.

The Orbi Home WiFi system can simultaneously handle your desktop PC, telephone, Dropcam Pros, tablet, laptop, Canon printer without any problems or degradation in band width. The speeds will be blazing fast and covered with a warm toasty blanket of super-fast Wi-Fi. The home WiFi system has a nice automatic handoff from the 5GHZ band to the 2.4 band as needed

There are competing mesh WiFi systems currently available but it is the Orbi Home WiFi system by Netgear that has been rated one of the best by PC magazine website for throughout over distance and overall performance.

With the satellite placed in the middle of the house you can now get a strong wireless signal and fast speeds at the far end of the house, on the floors above and below the network equipment. Even in an old stone house that forever was unwieldy for WiFi, the Orbi home WI Fi systems works fine. The satellite proves great coverage in the whole house under one SSID, you can now get rid of the boosters or extenders.

You then note the appropriate color changes emitted by each device accordingly. The setup is accompanied by an administrator account setup with proper log in and entry of information at the Netgear web portal (orbgin).

If you have setup the router none of the rest should be overwhelming. This should not take no more than 15 minutes and quick setup instructions are included. The blue illumination of the satellite indicating a good connection to the Orbi router will be on for some seconds until it shuts off on its own.

Changing the SSID and DHCP range is easy to change once you get it setup initially but this entirely depends on you, if you want to change or not. Unlike other mesh WIFI solutions the Orbi Home WiFi system does not have to have connection to a service in order for it to function.

Orbi Home WiFi system is very secure and there is an easy setup separate and secure internet for guests.

Orbi Home WiFi System is a very nice benefit of the WiFi system .For instance, allows you to connect your Roku 4 streaming device to the internet by means of a hardwired connection unlike other Ethernet ports which are located in different rooms. The additional improvement in streaming is readily noticeable.

When you are experiencing problems setting up the Orbi Home WiFi system you can call the Orbi support and they will advise you on how to go about the setup. If your WiFi system is faulty they will not hesitate to send you a replacement for free 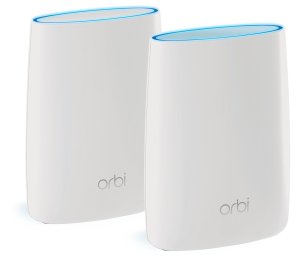 So far I highly recommend Orbi Home WiFi System without any reservations whatsoever. If you buy one you will very likely also be duly impressed. It gives you one of the best WiFi experiences you will ever get.

I can assure you 80% of the purchases fell in love with the Orbi Home WiFi system and I have no doubts you will also be proud of your purchase.